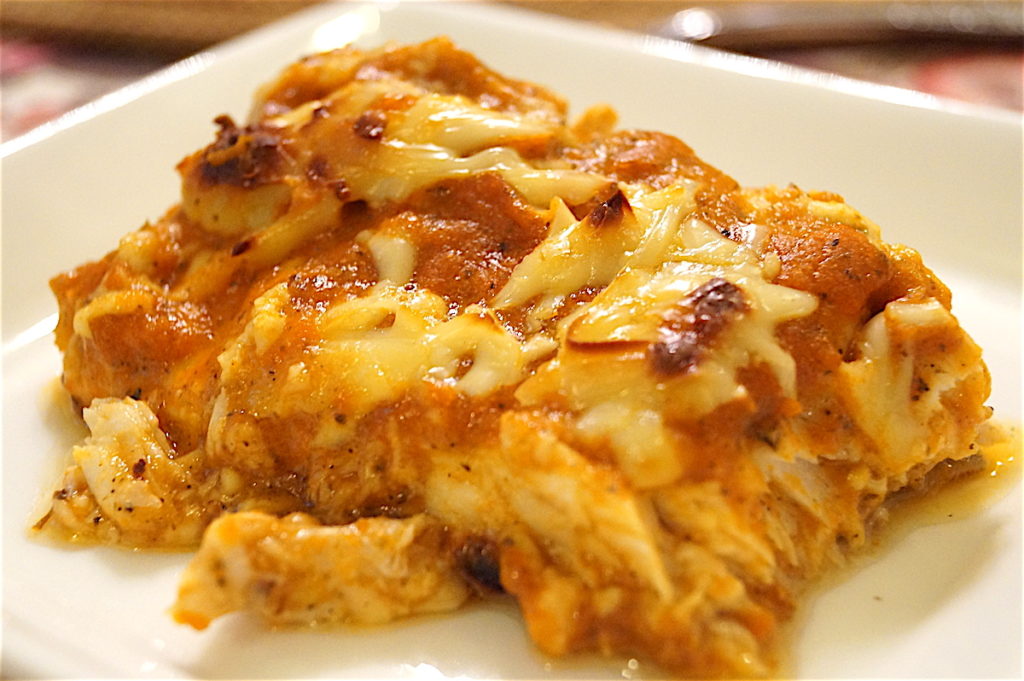 Last night being a Friday and all, it was not feasible to give everyone the usual simple fare of dal, roti, sabzi (vegetables), and looking into the freezer, I found that we’ve run out of every thing but two fillets of fish. The last few times I’ve tried to bake fish it has been a disaster because water has leaked out of it to such an extent it’s washed away all the flavour.

It would have been easy to pan grill it but being a stubborn cuss, I had to try and see if something I did would work on the baking front. So I smothered it in a spicy sauce so that even if there was water leakage it would still have enough flavour and patted the fish totally dry so that it would release as little water as possible. And it worked. The super high heat helped too

Be sure to remove the skins from the red peppers. Adjust the seasoning and the sour component to your taste and enjoy. I did not add any cream to this as I wanted a spicy sauce and the flavours of the red pepper to stand out and flavour the fish well. So here it is.

Pat the Bekti fillet with paper towels till it is totally dry from all sides. With a sharp knife make shallow diagonal cuts along the length of the fillet on the top side. Sprinkle salt and pepper all over the fillet and place the fillet in a baking dish long enough to fit the entire fillet without folding, with the scored side facing up. Pour the oil over the top of the fish and refrigerate.

Take the peeled red peppers, cut them into smaller chunks and blend in a mixie or blender till there are no chunks left. Add the garlic and jalapeño and blend more. Then add the salt, vinegar, and basil and give it a good whack till it’s all a smooth sauce with no lumps. Check the seasoning and adjust accordingly. Note – there’s no oil in the sauce.

Pour the sauce over the fish, making sure it fully coats the bottom too. You can reserve some sauce for later if you feel it is too much.

Sprinkle the grated cheese all over the top and refrigerate for about 2 hours.

Bake uncovered in the centre rack of a preheated oven set at a temperature of 250°C with both top and bottom heating rods on for 15 – 20 minutes. After that, remove and let it rest for about 5 minutes. Serve and enjoy with garlic bread.

Important notes: Make sure you pat the fish totally dry before marinating. There should be no moisture on the fish especially if it was frozen and then defrosted. Fish tends to release a ton of water in the oven making it taste insipid and terrible. Patting it dry will reduce the amount of water it emits.

Bake the fish at the highest temperature setting for a short period of time to get a light flaky texture.

Remember, every fish cooks differently and has different textures. Betki (Barramundi) has a softer more mushy texture and is generally thinner than Sole or Kingfish so cooking timings can vary by a couple of minutes here and there.

Also Know Your Oven. Each oven behaves differently and heating temperatures and timings vary with size, make and model. Bake with that knowledge. My timings are given according to my 38-liter oven specifications.