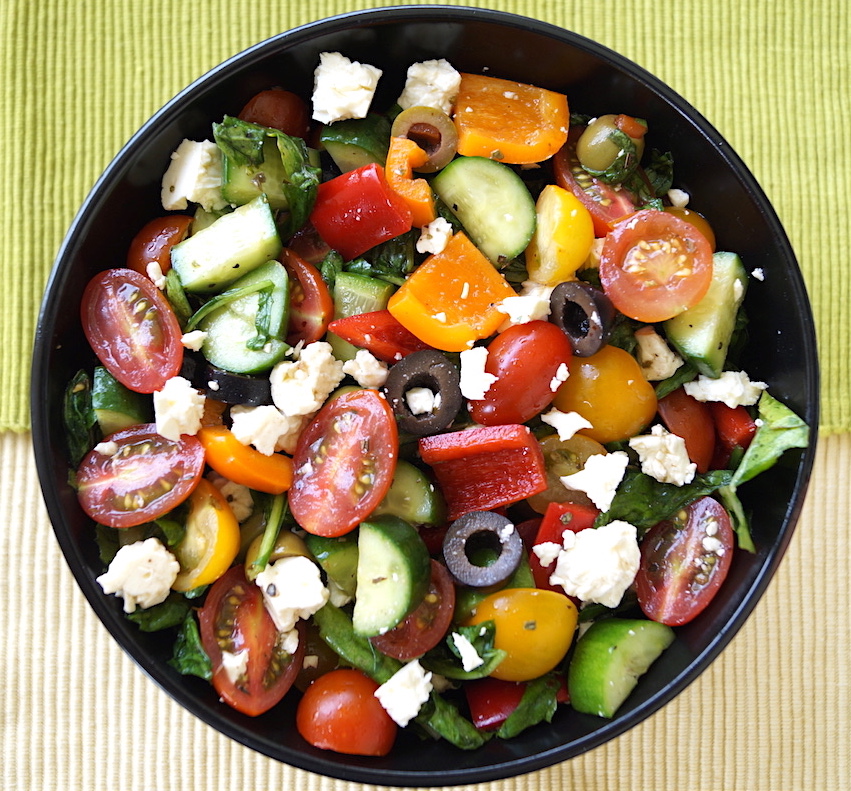 This is a totally unexpected post and yet another salad, but I was compelled to put it out there. You know when the food gurus say that food tastes best with the freshest and good quality ingredients, they’re not lying. So over the weekend, we had a little organic market fete thing going on where I stay, and one of the stalls there was displaying just four items – cherry tomatoes, candy tomatoes (yes they’re a thing apparently), mini cucumbers and mini red and orange bell peppers.

I have a thing with colour. I get very attracted by lots of different colours, much to my mom’s amusement and sometimes dismay when I was a kid. I would always choose the most colourful sweetmeat or dish on the menu and generally wouldn’t like it very much – but that’s not going to be the case here. I traipsed over to the stall tasted the cherry tomato and was impressed. Then ate the candy tomato and liked it even more! They were firm, sweet, fleshy and delicious. I fell in love.

Now let me tell you why I’m gushing about these tomatoes. I normally don’t like them much. Cherry tomatoes and all these exotic mini fruits are not natural to India and to our cuisine, so they are sold in specialised vegetable stores, fancy supermarkets and are exorbitantly priced. But for the high price you generally get these thin skinned mushy ones that pop like a jello ball in your mouth. Not very appealing. Not that these are not pricey, but because the quality is so good, they are so worth it once in a while. And no, I’m not being paid to promote the brand. Stumbled upon it for the first time. Am just very impressed with their quality of produce.

The very bright, young women and men at the stall from `Nature’s Miracle’ informed me that this was a product of hydroponic farming, a process that uses no soil, but just mineral-rich water to grow plants. The stall was not selling any of their products that day, but had a lot of stock and because I expressed such love for the veggies, the lovely people just gave me a couple of bags of the stuff when they were packing up for the day. Very sweet of them.

When I was making this, It didn’t occur to me that it would end up like a Greek salad, but somehow it did. Greeks don’t use salad leaves in their traditional salad, but I did as it was a ‘use fast or the leaves will die situation’. I had just bought feta cheese and salad leaves that afternoon but the leaves were in a precarious condition, already wilting even in the refrigerator in the intense Indian summer.

My kids shocked the ever loving daylights out of me. They ate a bowlful of tomatoes as a snack while on their homework and other than the bell peppers, ate a huge portion of the salad an hour later. My son even tolerated the rocket leaves which he normally hates! I was so happy he was eating them which he never does, I even let him eat it with his hands and make tower formations and designs with various ingredient combinations. He’s actually eating salad leaves! I’d let him eat them with his toes if he wanted. 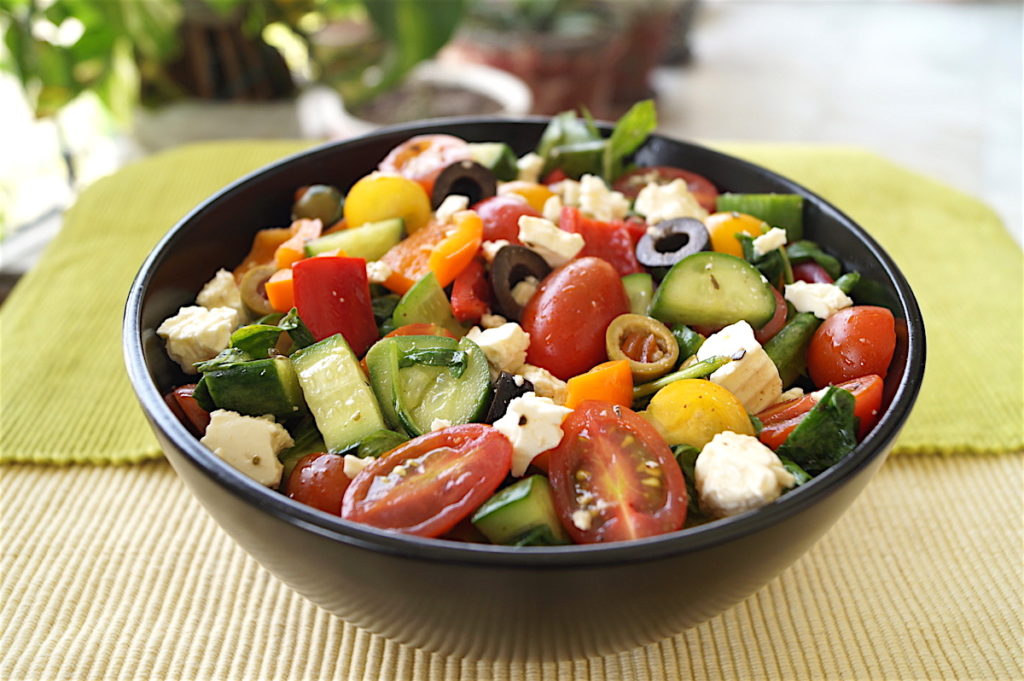 The daughter begged off the leaves and ate everything else, though the enormous amount of feta cheese didn’t hurt! The three of us polished off the whole bowl, and it was quite a bit, though I ate half of it. We skipped the onions because none of the kids wanted it. The husband, however, who wasn’t present for lunch that day, would have still run three miles away from it because in his own words, he is “allergic to vegetables”.

Normally I don’t go gaga over what I make but somehow, it was such a lovely experience overall – the lovely ingredients, making the salad with the kids getting involved on a relaxed Sunday afternoon. Sitting around the table chatting, the daughter cutting the tomatoes and olives under my very sharp supervision, laughter and communication. It was a ‘matchbox moment’, where you take your best memories and file them away in a matchbox sized compartment in your brain.

Ok enough yapping, heres how I made it.

Important Notes: The salad has to be served immediately after putting the dressing on the vegetables. Do NOT add the dressing a few hours before else it’ll suck out all the moisture from the vegetables leaving you with a soggy, tasteless mess.