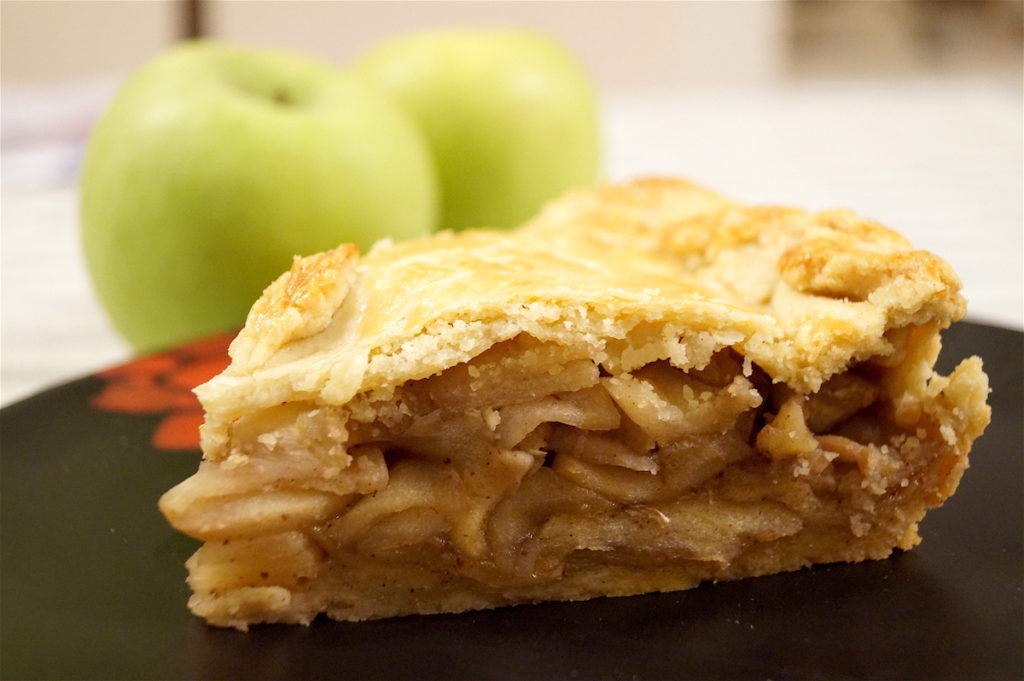 This is a healthier version of the regular apple pie because it uses jaggery powder instead of sugar and you wont even know the difference. It came about after my younger child was laid up with a terrible bout of allergy related respiratory infections and the poor baby has not been allowed to eat any candy or desserts as sugar makes a sore throat and chest infections even worse. Jaggery on the other hand, actually helps to clear the chest. Therefore, with so many food and fruit restrictions, I’m adapting my desserts to replace sugar and add ingredients she is allowed to have. 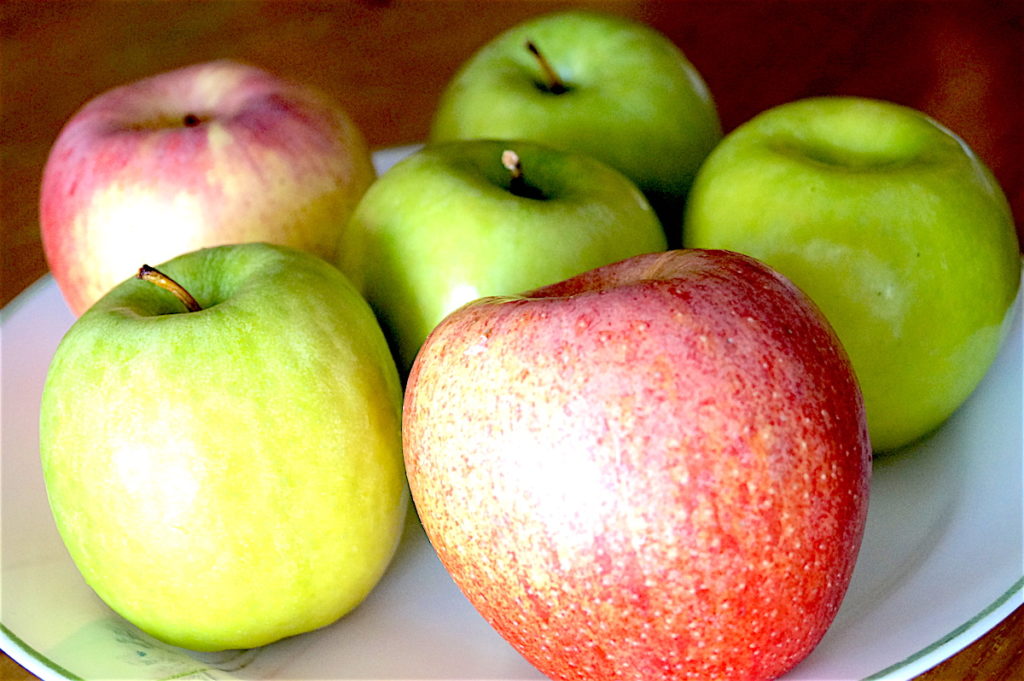 Here I’ve used a combination of Granny Smith apples, which have a sour tart flavour and Fuji apples which have a sweet flavour. The two apple varieties are also firm fleshed so they do not dissolve into mush while cooking. I didn’t use any lemon juice as the Granny Smith apples have enough of a tang on their own. All my desserts generally have less sugar and sweeteners as I try to get away with the minimum amount required to make it palatable but as jaggery is not as sweet as sugar, you may want to add more. 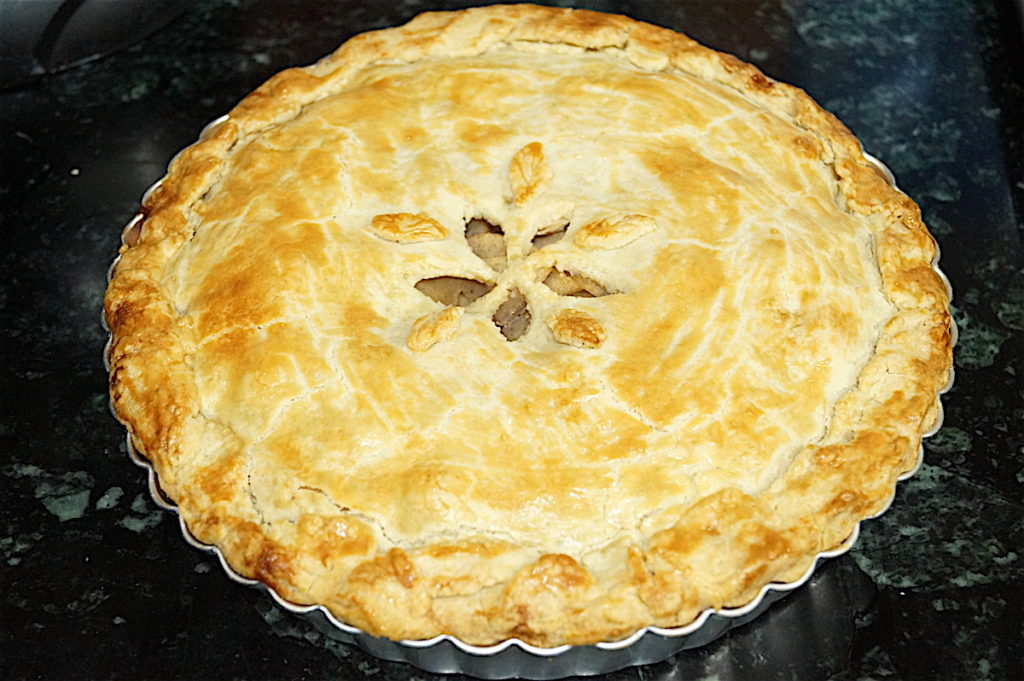 I’ve used organic jaggery powder here. Jaggery comes in two forms. Light brown and dark brown. The dark brown one has a concentrated treacly taste and the light brown jaggery is less intense. I’ve used the light brown powder here. In India, jaggery is called Gur and the powder is called shakkar. It’s available in abundance in the winter months so better to stock up and keep in airtight containers for the rest of the year if you think it’s not going to be available later.

I’m on a mission to try and replace white sugar as much as possible in my desserts. Of course, any replacement will still have the calories, but then instead of empty calories and harmful effects, alternatives like jaggery and honey have nutritional value and health benefits. Jaggery, made with sugarcane juice, has a host of minerals and salts that apparently clear your lungs, stomach, intestines, purify the blood and even relieves constipation if taken in small amounts on a regular basis. Diabetics of course have to refrain. 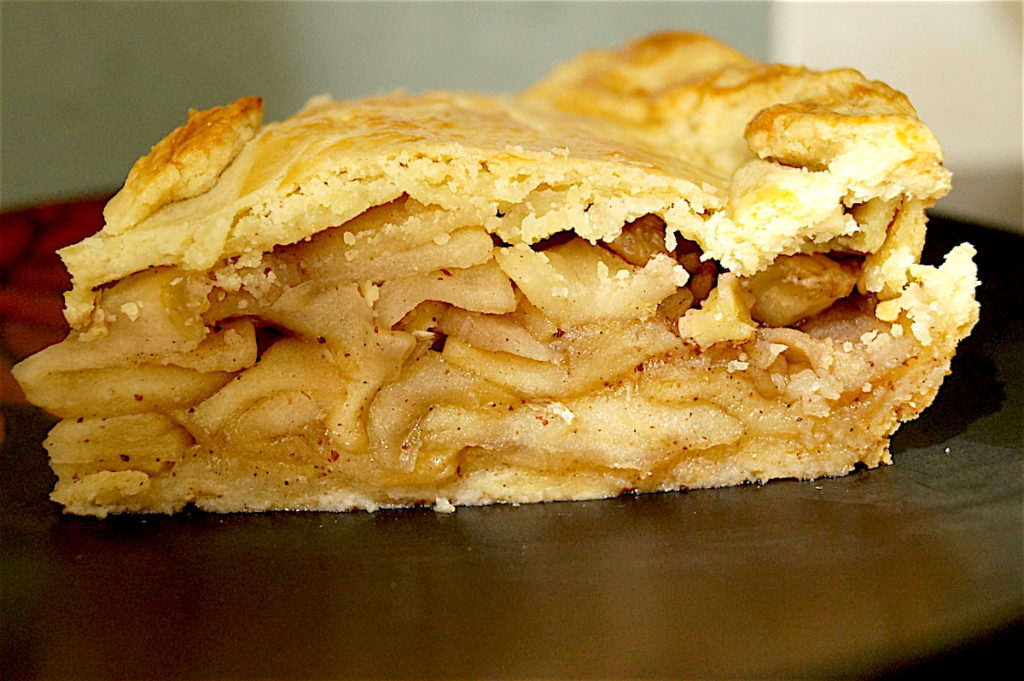 If you think you want to try something interesting and different, you can try this.

For the Pie Base (shortcrust pastry)

For a detailed pictorial idea of how to make a pie base go here. Please follow only the basic pictorial instructions up to the rolling part but follow the recipe in this post. This recipe has some modifications.

Important notes: Keep the butter chilled for the pastry and keep the pastry chilled after rolling and before baking. Pastry tends to melt and become a mushy mess in hot climates and will shrink with melted butter. The chilled butter and chilled pastry will give it a firm and crisp texture and will not shrink.

Use only the heating rods at the bottom of the oven for this. If you have an oven where you don’t have the option of turning the rods on the top off, you can place an oven tray between the rod and the pie. Direct heat from the top will end up burning the top crust before the bottom has a chance to cook.

Do not overcook the apples. You want them to hold their shape and not become a mushy mess.